Myeloid Proliferations Associated with Down Syndrome

This is a distinct entity in the World Health Organization (WHO) classification system within the section of Myeloid Proliferations Associated with Down Syndrome[1].

Transient abnormal myelopoiesis (TAM) associated with Down syndrome (DS) is a unique disorder of newborns with DS that presents with clinical and morphological findings indistinguishable from those of acute myeloid leukemia. The blasts have morphological and immunological features of megakaryocytic lineage[1][2][3][4][5][6].

TAM is diagnosed in ~10% of newborns with DS, but the true incidence is higher because not all newborns are symptomatic. TAM uncommonly occurs in phenotypically normal neonates with trisomy 21 mosaicism, and is extremely rare in neonates without chromosome 21 abnormalities[1][2][3][4][5][6].

Transient abnormal myelopoiesis occurs exclusively in patients with Down syndrome (constitutional trisomy 21), and affects approximately 4% to 10% of neonates. TAM manifests in the neonatal period, and is characterized by circulating megakaryoblasts with varied degrees of multisystem organ involvement. The median age of presentation is 3 to 7 days, though patients may be diagnosed at up to 2 months of life. The most common clinical manifestations include hepatomegaly (60%), splenomegaly (35%–40%), jaundice (15%), pericardial effusion (15%), pleural effusion (10%–15%), ascites (10%), respiratory distress (10%), and bleeding diathesis (10%). Less common features include hepatic fibrosis, hydrops fetalis, and renal failure. Characteristic hematologic findings include leukocytosis (WBC > 100K/μL in 20%–30%), thrombocytopenia (40%), and increased numbers of circulating blasts. Approximately 10% to 25% of patients are asymptomatic; thus, the diagnosis may be established as an incidental finding during laboratory assessment for some other cause. Occasionally, the finding of TAM may even be the first indication that a patient has trisomy 21.

The natural history of TAM is quite variable. Most neonates (80% with documented TAM) undergo spontaneous remission within 3 to 6 months of age. At the other end of the disease spectrum, neonatal (or even fetal) demise occurs in approximately 10% of patients secondary to diffuse organ infiltration by megakaryoblasts, associated parenchymal fibrosis, and subsequent multisystem failure. Independent risk factors that portend early mortality include WBC counts above 100 K/μL, preterm delivery (<37 weeks), effusions (pleural, pericardial, ascites, or hydrops), coagulopathy, bleeding diathesis, platelet count greater than 100K/μL, low birth weight, and failure to clear peripheral blasts. When these high-risk features are present, chemotherapeutic intervention is warranted.

Approximately 20% of patients with TAM develop AMKL within the first 4 years of life and this may be preceded by a myelodysplastic-like syndrome. The World Health Organization classification category “myeloid leukemia associated with DS” (DS-AMKL) encompasses both myelodysplastic and leukemic manifestations regardless of blast percentage. The median age of onset is 2 years, younger than that seen in non–DS-AMKL. Patients typically manifest with low WBC count, cytopenia, organomegaly, progressive marrow fibrosis, and clonal cytogenetic abnormalities, e.g., trisomy 8. Blasts in DS-AMKL are morphologically and immunophenotypically similar to those seen in TAM. Patients with DS-AMKL have a favorable prognosis with 80% 3-year overall survival. This response rate is, in part, attributed to enhanced chemosensitivity of megakaryoblasts to cytarabine. The cytidine deaminase gene functions in cytarabine catabolism, and its transcription is diminished in DS, which may lead to diminished intracellular drug metabolism and consequent increased drug efficacy[1][2][3][4][5].

Blood and bone marrow are the principle sites of involvement. Extramedullary involvement, mainly of the spleen and liver, is almost always present as well[1].

The morphological and immunophenotypic features of TAM are similar to those seen in most cases of acute myeloid leukemia associated with DS[1]. Peripheral blood and bone marrow blasts often have basophilic cytoplasm and coarse basophilic granules and cytoplasmic blebbing suggestive of megakaryoblasts. Some patients have peripheral blood basophilia; erythroid and megakaryocytic dysplasia is often present in the bone marrow. No critical threshold has been established for blast percentage in the diagnosis of TAM. Circulating blasts can often be seen in both neonates without DS, especially those who are ill or premature, and neonates with DS, emphasizing the importance of manual peripheral smear review as well as ancillary laboratory studies in the evaluation [5]. Bone marrow examination may not be indicated as marrow findings are either similar to, or less pronounced than, those in blood[5]. 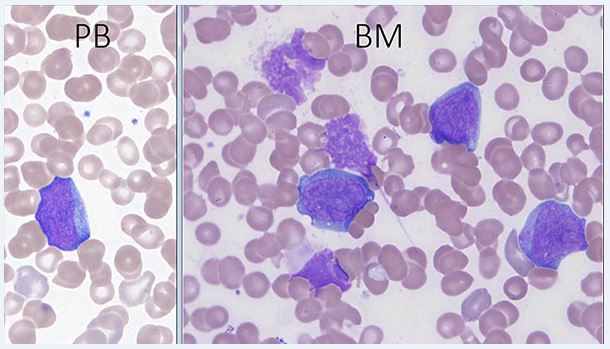 In addition to trisomy 21, acquired GATA1 mutations are present in blast cells of TAM [1].

Somatic GATA1 mutations are pivotal in the development of TAM and have proven to be a marker of clonal identity in its evolution to DS-AMKL. The GATA1 gene is located on the X chromosome and encodes a zinc finger transcription factor that is essential for normal erythropoiesis and megakaryopoiesis. Its de novo protein product contributes to cytoplasmic maturation in megakaryocytes and organelle development in platelets, but functions as a negative regulator of megakaryocyte proliferation. Various acquired mutations in exon 2, or less commonly exon 3, ultimately yield a mutant N-terminally truncated GATA1 protein (designated GATA1s) that has been detected exclusively in patients with DS. GATA1 mutations (both single and multiple clones) have been detected in Guthrie card blood spots of patients with DS.

In normal human development, the liver is the primary site of fetal (in utero) hematopoiesis. With birth, the hepatic microenvironment changes such that liver hematopoiesis is down-regulated while bone marrow simultaneously assumes this primary functionality. Given the clinical and laboratory manifestations of TAM, which include leukocytosis and circulating megakaryoblasts, often with hepatomegaly, TAM reflects perturbation of this normal developmental process. Transient abnormal myelopoiesis may arise in utero within the fetal liver with “spontaneous resolution” reflecting the natural process of hepatic hematopoietic down-regulation.

TAM is the result of a multistep process in which trisomy 21 is the “initiating” event in disease pathogenesis. Trisomy 21 creates an environment, in utero, in which hematopoietic progenitor cells within fetal liver are primed for acquisition of either single or multiple somatic GATA1 mutations that reflect a “secondary hit,” thereby promoting hematopoietic dysregulation and emergence of TAM. With birth, hematopoiesis naturally transitions from fetal liver to bone marrow and the GATA1 megakaryoblastic clone becomes quiescent. However, this clone persists over time and undergoes other somatic mutations and epigenetic events ultimately lead to the impaired megakaryocytic differentiation and uncontrolled proliferation characteristic of DS-AMKL[2][3][4][5].

When TAM is suspected clinically, cytogenetic karyotypic analysis should be performed to establish constitutional trisomy 21, while GATA1 mutation analysis is also recommended to document clonality of the blast population. The presence of an acquired mutation(s) in exon 2 or exon 3 of the GATA1 gene on chromosome X establishes a diagnosis of TAM and serves as a potential marker for future disease monitoring in the development of AMKL. If a GATA1 mutation is detected in a neonate without clinical features of DS, cytogenetic analysis should still be performed to exclude DS mosaicism[5].

Transient abnormal myelopoiesis is a preleukemic disorder that occurs only in neonates with constitutional trisomy 21. Transient abnormal myelopoiesis typically presents in the first week of life with leukocytosis, thrombocytopenia, hepatomegaly, and circulating megakaryoblasts, the latter of which contain an acquired GATA1 mutation. Although TAM can be fatal in 10% of patients, it most often resolves spontaneously, but is believed to persist in a “quiescent” state. By 5 years of age, 20% of patients progress to AMKL following an intervening remission and/or a preceding myelodysplastic-like syndrome. Down syndrome–AMKL has a favorable prognosis with enhanced chemotherapeutic responsiveness to cytarabine.

The disease evolution of TAM and DS-AMKL is currently conceived as a sequential multistep process of leukemogenesis. Trisomy 21 represents the critical “initiating” event. GATA1 mutation reflects a “secondary hit” to fetal liver hematopoiesis, particularly megakaryocytic-erythroid progenitors, that leads to TAM and confers some selective advantage.

Given the risk of progression to DS-AMKL, some advocate that all neonates with DS undergo routine screening for TAM with manual peripheral blood smear review and GATA1 mutation analysis. With detection of a GATA1 mutation, clinical assessment and routine laboratory screening is then suggested periodically throughout early childhood[1][5].

*Primary authors will typically be those that initially create and complete the content of a page. If a subsequent user modifies the content and feels the effort put forth is of high enough significance to warrant listing in the authorship section, please contact the CCGA coordinators (contact information provided on the homepage). Additional global feedback or concerns are also welcome.